Why we joined the Alliance Jiu Jitsu Team. 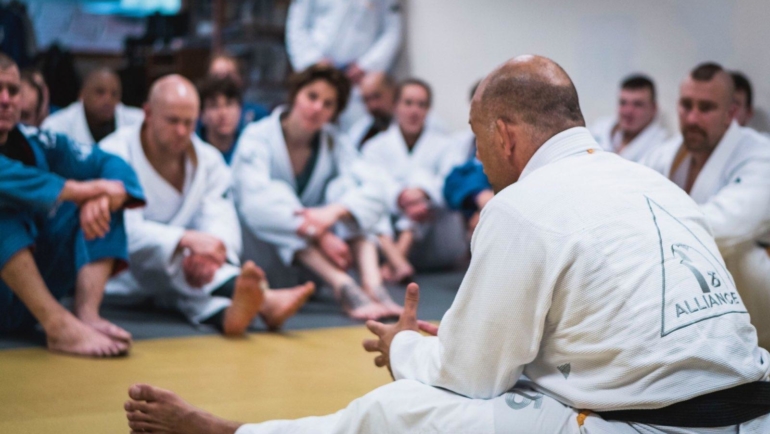 It was hard being an owner of one of the first Jiu Jitsu Academies in the Madison Area.  When we first got started there were a lot of questions on how exactly an academy should be run.  When the first “wave” of BJJ hit the U.S., many Brazilians strapped on their black belts on came here for what I call the BJJ Gold Rush.  It was everyone’s chance to build their brands and make a name and a living for themselves.  Being in Madison, Wisconsin, we weren’t necessarily first on the list of stops.  Having come from a warmer climate in Brazil, and many of them also surf fanatics, they seemed to prefer the warmer coastal climates.  Big Surprise!  So it took a long time for many of us to be exposed to “Real” BJJ.

I, like many, got excited about BJJ from watching the first UFCs and seeing it’s efficiency versus larger opponents.   At the time there was very little information available about it and even fewer instructors.  There was no YouTube or Internet streams of technique.  There were almost no books available and only a handful of expensive VHS tapes available in the back pages of Black Belt magazine.  So when someone with a Brazilian sounding name and a black belt showed up in your area, you went and tried to learn something.

It was kind of like the wild west.  You never knew what you were going to get or learn.  Out of this grew several different types of Academies with several different mentalities.  I’m often told by many of the old school BJJ Masters, that we were lied to.  That so many Black Belts came to try and make a quick buck off of BJJ.  That they did a huge disservice to the sport.  Now that mentality is ingrained in U.S. BJJ and should be changed.  We thought it was simply lots of rolling and tapping people out to prove BJJ worked.   We didn’t know how wrong we were!

One thing that has always been important to me, was the effectiveness of Jiu Jitsu.  After all, this was the reason I got involved with BJJ in the first place.  The first UFC was a showcase for different styles of Martial Arts competing against each other, and BJJ had reigned supreme.  So all of us who began to pursue the art after this, did so because we believed it to be a truly effective martial art for self defense and combat.  I still believe this with all my heart.

I have always believed in competition when it comes to BJJ and so it was always important to me that the level in our Academy remain very high.  But it seemed contradictory to running a profitable academy, as the fighters/competitors never have or will pay the bills.  So it seemed like we were stuck with two choices.  Either a small amount of high level students on the mats or a room full of people who enjoyed training, paid their dues, but would never win a championship.

The real struggle became the balance of trying to run a BJJ academy where we could teach effective Jiu Jitsu, but also actually keep the doors open and lights on.    You walked into some academies and it seemed like walking into a room full of rabid Pitbulls, yet other Academies seemed like belt factories where there was lots of color around everyone’s waist but the level on the mats was very low.  I’d like to say that it’s changed, but many places still fit into one of those two categories.

Everything changed when we joined the Alliance Team.   Being a fan of BJJ, I watched the World Championships every year.  Following the top names and teams and seeing the new techniques evolve.  Alliance was at the top of the heap.  They had already one a few world titles back in 1998 and 1999 and then went through some restructuring by releasing some of their athletes who seemed to be subversive to the team.  They seemed to be blossoming again as a new and better team after some refocus.

Alliance had won the World Championships in 2008 and again in 2009, which was when we decided to try and join the team.  The biggest attraction to Alliance was their professionalism.  They seemed to have solved the riddle on how to produce both high level athletes and have a clean, well run, and most importantly, a well attended Academy.  We approached Master Jacare and requested the possibility of becoming part of the Alliance Team.  After a background check, lineage check, and lots of other things to verify we were a good fit, we were officially an Alliance Academy on January 1st 2010.

Training at Alliance Headquarters, we immediately saw all of the things we realized were missing from our academy.  First off, there was ZERO Ego in the Alliance Headquarters.  All of these students trained together, very hard, but took great care of each other.  I soon realized that Jacare treated everyone the same no matter their status as a competitor, champion, or just an average student.  You couldn’t tell the difference between any of them. Atleast by the way they were treated by their instructor.  It was strange to me, seeing as how their reputation seemed to be built on competition.  But what is obvious now, is that “special treatment” is toxic to the team and academy.

In hind sight, I can look back at several relationships with students in the past where “special treatment” created ego problems, as well as feelings of animosity when the instructor or student felt wronged in some way, based on personal feelings.   I began to understand the real meaning of being part of the team.  It was bigger than me, bigger than any of us.   Running a professional academy was the key to it all and we needed to make some changes ASAP.

One big thing that is easy to forget, is that we were all white belts once.  You’ll often hear things like, “White belts are friends, not food” or other joking comments.  Funny Yes, But also true!  The reality is, everyone starts as a white belt.  If they get beat up, broken, and/or eventually quit, it’s a disservice to the art.  They never got to find out how great BJJ is for their body, mind, and over all well being.  BJJ is a contact sport, but that doesn’t mean everyone should always be injured.  I came to find out that Alliance didn’t allow people start to live train immediately.  Students, new to the sport, were given time to acclimate and learn many techniques before ever engaging in live sparring.

We immediately adopted this into our Madison Academy and we have since grown the Academy to 4 times as many students.  Not only that, but we have seen the level change.  Students improve faster and with more knowledge than before.  I’m honestly jealous of the curriculum my students have and I wish I could go back and start over.  What the Alliance founders knew is not everyone immediately understands BJJ.  They shouldn’t get beat up because they don’t know Jiu Jitsu.  Everyone needs to learn at their own pace.  As they do, they become valuable members of our team and are the reason we continue to grow.

Eventually many of these students become some of our most dominant competitors.  Learning this has helped us adapt our teaching styles.  This way we can make sure each student receives the kind of teaching that best helps them progress.

It has taken us years to try and steer this academy the way we want it to be.  10 years later, while we are still not perfect, but we are working hard at it every day.   Now we provide the best training for both the new and the experienced BJJ athletes.  The lessons we continue to learn from the Alliance Founders are shaping us to be the premier BJJ Academy in the Midwest. 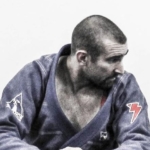 He is a Brazilian Jiu-Jitsu Black Belt under Romero “Jacare” Cavalcanti and Alliance BJJ.  Mark has over 20 years of experience in Brazilian Jiu Jitsu